Deeper Pro Plus Review in 2022

The Deeper Pro Plus is a castable fish finder, launched by Deeper company as part of their sonar collection, following the Deeper Start and Deeper Pro. Like other fish finders, the Deeper Pro Plus is intended to improve your angling prowess, whether you’re onshore, on a kayak, or on ice. However, what truly sets it apart from the previous models and any other fish finder is its mapping function, which allows you to create bathymetric maps.

Now, the idea behind this fish finder and other Deeper smart sonars came when two avid anglers were inspired to make a wireless and portable sonar device, and thus the Deeper company came to be in 2012.

With time, the company grew and received 15 or so international awards for its innovative products, which are currently available in more than 50 markets. Things to Consider Before Buying the Deeper Smart Sonar Pro Plus As any fishing enthusiast knows, sonar devices are a great way to step up your fishing game and avoid endless hours of waiting for a fish to bite. Not only can they tell you where the fish are, but they can also tell the bottom contour and underwater structures.

Nonetheless, regular sonars aren’t all that portable and are, therefore, inappropriate for anglers who love to move around. So, if you’re such an angler and you need a sonar device that’s easy to carry around on your fishing adventures, then the Deeper Pro Plus is the answer to your problems. It’ll work whether you’re on land, boat fishing, or kayak fishing.

Still, before buying the Deeper Pro Plus fish finder, you should consider the following: The Deeper Pro Plus fish finder has quite an impressive casting range, which can reach a distance measuring up to 100 meters (330 feet). Its depth range is equally impressive. It can scan deeper than other fish finders by about 30 meters, having a maximum depth of about 80 meters (260 feet). Accordingly, this Deeper sonar is perfect for most deep lakes and rivers.

As you can probably tell, these ranges are much better than those of other castable fish finders, which means you have a better chance of finding those elusive fishies.

Impressively, the Deeper Pro Plus fishfinder boasts two-beam frequencies to cover both shallow and deep water.

Personally, this feature greatly helped when I was fishing in a lake near home. The wide beam gave me a general idea about where the fish were converging, and once I was settled in that location, I used the narrow beam to catch two lovely trout. Thanks to its dual-beam transducer and Wi-Fi connection, the Deeper Pro Plus has incredibly accurate scanning.

Basically, the transducer can transmit to the connected device 15 scans/second. Such a scanning rate enables target separation of as small as 2.5 cm (1 inch), which is all an angler could ask for, really.

Now, accuracy-wise, why does the fact that this device uses Wi-Fi matter?

Quite simply, Wi-Fi is much faster than Bluetooth. Ten times as fast, if you can believe it. Accordingly, the receiving device, be it your phone or laptop, will be able to receive real-time data, giving you good and reliable information about your location.

So, combine a high sonar scan rate with a good Wi-Fi connection, and you’ve got yourself a more powerful and accurate fish finder.

Still, it’s worth mentioning that its accuracy tends to take a dip when there’s a good amount of turbulence. While the Deeper Pro Plus can work well enough with smooth trolling speeds, any additional movement may submerge it and cause it to lose connection to your device.

As such, this device is highly discouraged for large boats that go into rough waters. However, kayak and belly boat fishing are okay. Simply attach it to your bait boat or rod with the included screw-in ring attachment, and you’ll be good to go. The main advantage of the Deeper Pro Plus over every other wireless fish finder out there is its onshore mapping feature.

Simply by casting out the device and reeling it back in, you can create detailed maps live on your phone, tablet, or laptop, thanks to the device’s built-in GPS. Then, by using the Deeper app and your phone’s GPS, you can mark your favourite fishing spots. All while standing on the shore!!!

Of course, you can still create underwater topographic maps by trolling the device from your kayak or boat. Nonetheless, this is the only fish finder that makes creating bathymetric maps from the shoreline possible.

Oh, and did I mention that you don’t need internet or cellular data to use the Deeper sonar? Now, how cool is that?!

The Deeper App and its web platform become available to you when you use the Deeper fish finder. Fortunately, you can download the app on both iOS and Android devices, and you can also use it as an internet platform if you want.

Essentially, the Deeper App transforms your smartphone screen into a sonar display that allows you to view all your scans. But, it also does so much more than that.

You can use the app to modify your view setting, mark fishing hotspots, and record your catches. Moreover, you can use it to learn about the weather, view your previous maps, and search for commonly preferred fishing spots.

Still, bear in mind that your experience with the Deeper sonar will largely depend on your receiving device’s quality and clarity. That being so, the better your phone or tablet, the better the scans and user experience.

Honestly, I had a hard time with the app in the beginning. However, due to the constant updates, it started to become much easier and smoother to use. The Deeper Pro Plus, in conjunction with the Deeper App, offers both a basic display mode and a detailed display mode. The basic mode primarily shows fish icons that mark fish location, in addition to other features like bottom contour and depth.

Such a basic display is mostly okay for beginners. However, experienced shore anglers will benefit more from the detailed view, which shows ground hardness and consistency.

Additionally, the detailed view can demonstrate most lakebed features and contours as well as water temperature, depth, weed thickness, and of course, where the fish are.

Typically, fish echoes will be marked in yellow or orange, and you can choose to turn off the fish icons if you so desire. Meanwhile, vegetation will appear green, though I still can’t gauge how accurate this is.

Unfortunately, though, this Deeper fish finder isn’t all that great at showing fish arches. At best, you can see dots, which aren’t enough to tell you the true depth and location of fish.

Tip: Keep in mind that in order to get a good image, your display scroll speed needs to match your reel or moving speed. If it doesn’t, either your image will freeze or your scans will look weird, and you won’t be able to easily interpret them.

Since this Deeper sonar uses Wi-Fi, its battery tends to die out faster than Bluetooth-operated sonars. So, they can only last a maximum of 6 hours. Thankfully, though, it comes with a lithium battery that can be charged with a micro USB B-Type cable, so no external batteries needed here.

Note: If you’re experiencing battery problems from the beginning, make sure to exchange the device at once when it’s still under warranty. Otherwise, it’ll be very expensive to fix as only the company can fix it in Lithuania, and you’ll have to cover the shipping charges.

Whether you’re a shore angler, ice fisher, or kayak-fishing enthusiast, this Deeper sonar will have you covered. And it’s not just me who thinks so. I’ve scoured the internet and found similar users who thought the same. So, take a look at their experience to have a better understanding of the device. 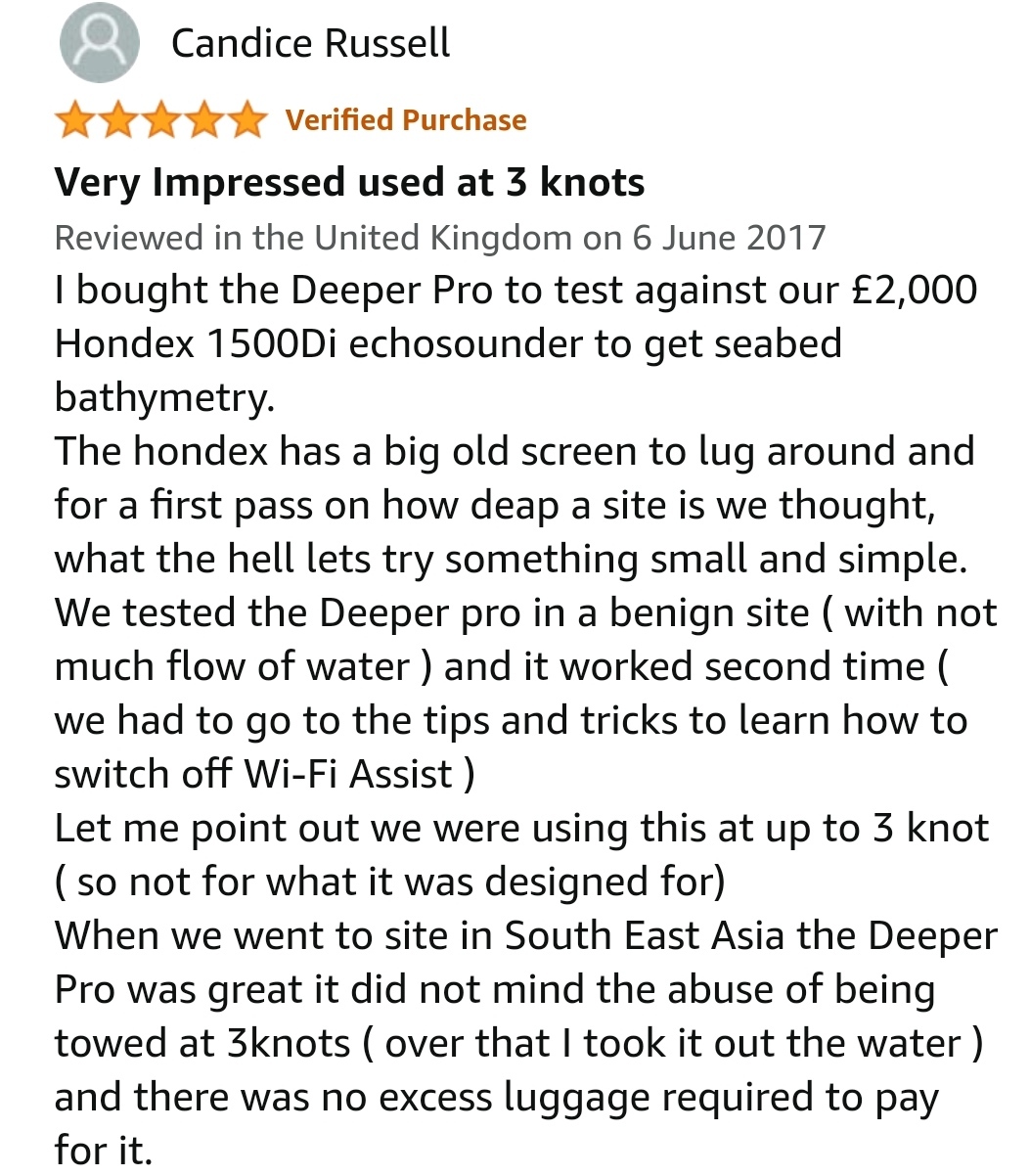 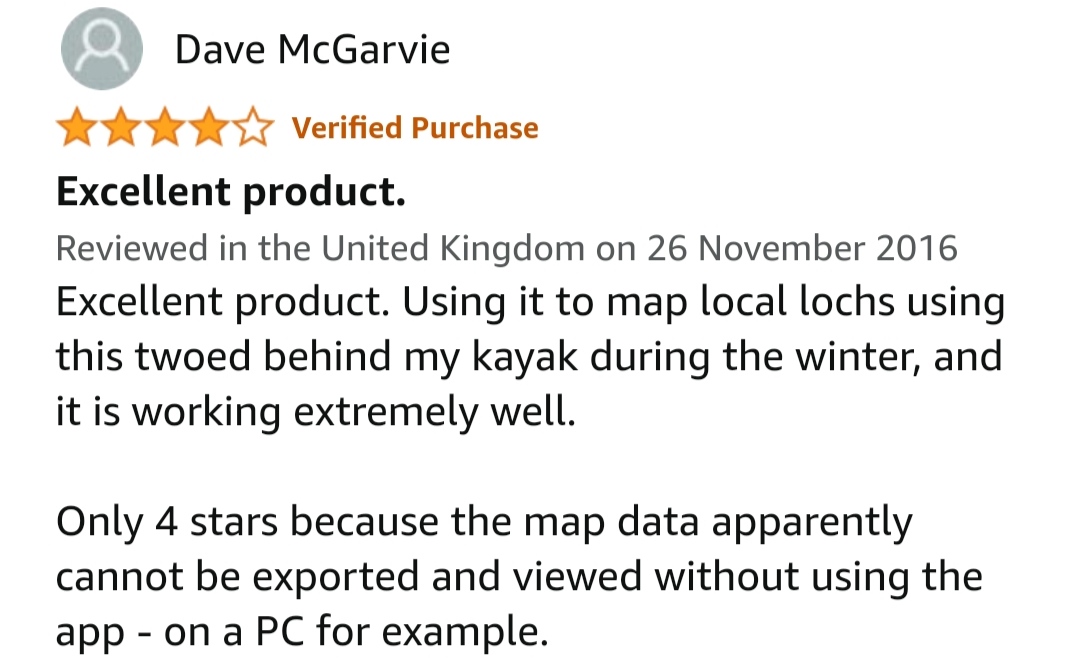 Alternatives for the Deeper Fish Finder

Though the Deeper Pro Plus is great, it does fall short in a few aspects. So, what alternatives should you turn to? Well, I recommend the Vexilar SP100 SonarPhone with Transducer Pod, Garmin Striker Cast, and the ReelSonar iBobber castable fish finder.

The Vexilar SP100 SonarPhone with Transducer Pod is great if the Deeper sonars are out of your price range. It operates in a similar way, and you can either cast it from the shore or troll with it. Nevertheless, the price deduction comes with a disadvantage, which is the life of its battery. However, there isn’t much of a difference in other aspects.

On the other hand, if you spend long hours in the water and you want something that’ll last longer than the Deeper sonar and the Vexilar SP100, then the Garmin Striker Cast is the one for you. Its battery can typically last 10 hours, and sometimes more, because it uses a Bluetooth connection rather than Wi-Fi. Though the Garmin Striker Cast has a smaller casting range than the Deeper Pro Plus, it’s also slightly cheaper and of comparable quality.

Our last recommendation is the ReelSonar iBobber castable fish finder. Again, this device is great if you need a long battery life as it also uses Bluetooth. However, its Bluetooth connectivity range is shorter than that of the Garmin. In addition, its scanning depth only goes half as that of the Deeper Pro Plus. However, what I really like about it is the fact that you can pair it to your Apple or Google watch, eliminating the constant worry of dropping your phone into the water.

So, did something catch your eye? If so, make sure to click on its link and see if it suits your purposes. As I previously said, choosing a good fishing location can be hit or miss if you don’t use a sonar device. Sadly, though, most sonar devices are bulky and hard to transport from place to place. However, the Deeper Pro Plus eliminates that problem due to its small size and weight. Combine this with the fact that it’s wireless and has dual-beam scanning, and you’ve got yourself the perfect portable sonar.

So, make sure to check out the Deeper Pro Plus, and good luck on your next fishing adventure. 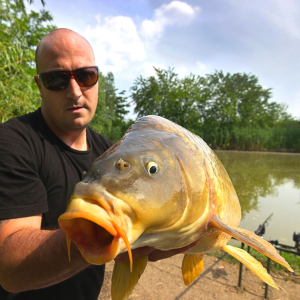